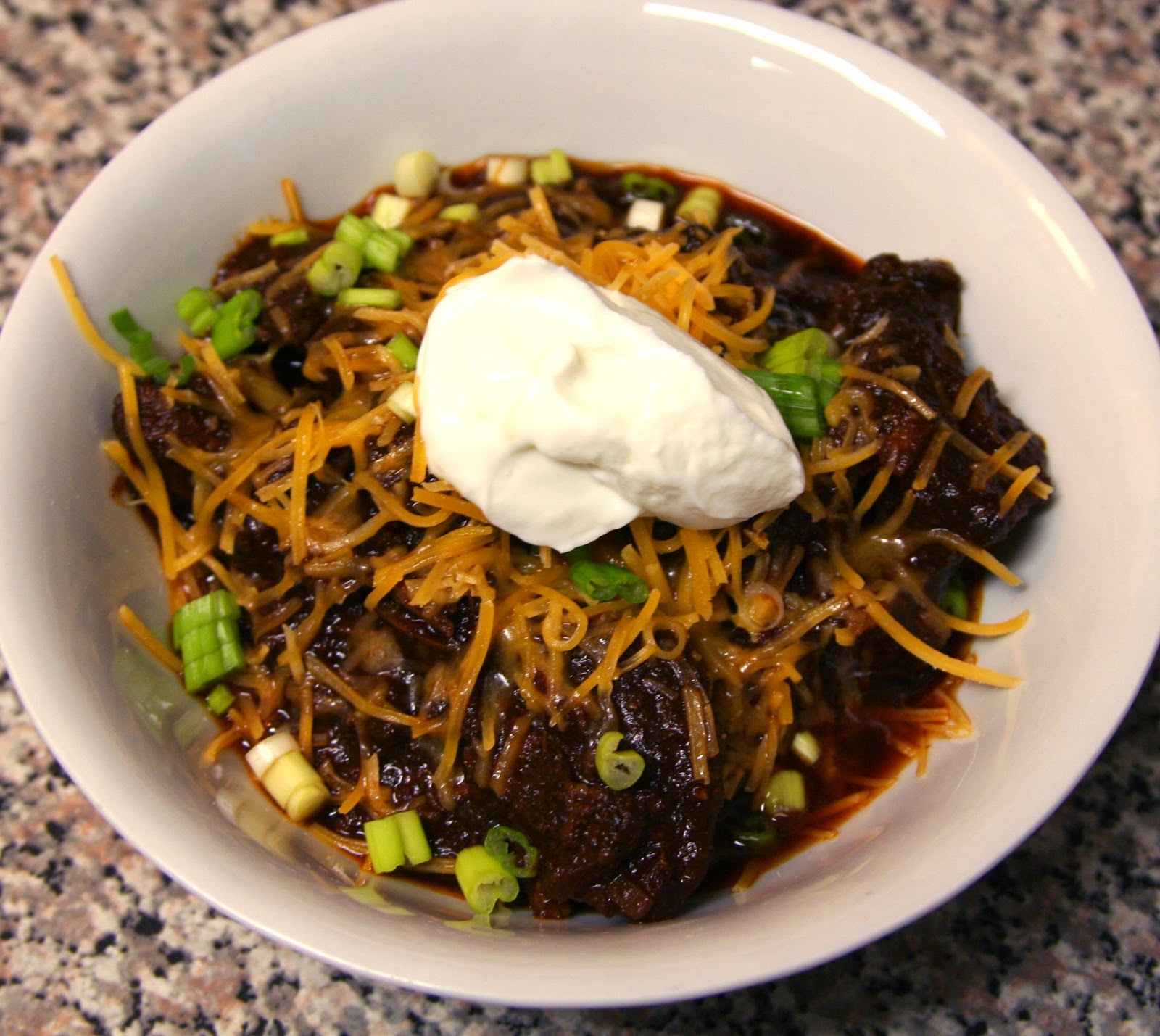 Want a project that will keep you entertained for most of the day?  I've got one for you.  Making Texas chili.  It only takes, oh, FIVE HOURS.  Not that bad.  And it's pretty darn spicy, so if you have issues with that, you might want to cut the cayenne and chiles de arbol way back.  But otherwise, this will put some hair on your chest.

Remove the seeds and stems from the dried chiles.  In a dry skillet heated on high, toast the ancho chiles, pasilla chiles, guajillo chiles, chipotle chiles, and chiles de arbol on each side for about 10 seconds or just until they start to puff.  Fill the skillet with enough water to cover chiles.  Leave the heat on until the water begins to boil and then turn off the heat and let the chiles soak until soft, about 30 minutes.

Meanwhile, in a large, heavy pot such as a Dutch oven, fry the bacon on medium heat.  When it's done, remove from the pan and drain on a paper-towel-lined plate.  Leave the bacon grease in the pot, and on medium heat, cook the beef on each side until lightly browned, about 10 minutes.  (You may have to do this in batches.)

Remove the browned beef from the pot.  Leaving the heat on, add the diced onions to the pot and cook until translucent, about 5 minutes.  Add the garlic and cook for another 30 seconds.  Add the beef back into the pot, crumble in the bacon, and add the coffee, beer, cumin, oregano, cinnamon, cloves, allspice, cayenne, chocolate, 3 cups of water, and salt.  Turn the heat up to high.

While the pot is coming to a boil, make the chile puree.  Drain and rinse the chiles, then place them in a blender along with the pequin chiles (you don't need to presoak these little chiles) and add 1 cup of fresh water.  Puree until nice and smooth and then pour the chile puree into the pot.

When the chili begins to boil, turn the heat down to low and simmer, uncovered, for 5 hours, stirring occasionally.  Taste it once an hour and adjust seasonings.  If it starts to get too dry, add more water.  After 5 hours, scoop out ¼ cup of broth out of the pot and combine with the masa harina.  Pour the masa harina mixture into the pot and stir until the chili is thickened.  Let the chili simmer for another 30 minutes or so.  When done, serve with Cheddar and onions.

Note: If you can't find all of these chiles, just use the more readily available anchos and chipotles.
Posted by Sara at 7:38 PM