The Best Casserole Cookbook Ever: Almond Chicken with Broccoli and Cream Sauce 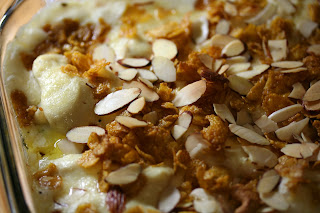 I think I was traumatized by the curry casserole.  No really.  That was a pretty disturbing color and flavor.  And it's pretty rare that something I make is so bad that it ends up in the trash.

But what do you do when you experience something disturbing?  Get back on the horse.  Or in this case, crack open the cookbook and scour it for something that sounds even halfway normal.  Chicken and broccoli and cream is normal, right?  Nothing scary here.  Fingers crossed.

Well, it was a lot of darn work for a so-so payoff.  I can't believe I'm going to say this, but I almost think a can of cream of mushroom soup might have saved this one.  I know, I know, I have blasphemed in the worst way.  But on a high note, this cookbook is going to the used bookstore to find a new home.

Place the chicken breasts into a skillet and add the 2 cups of water and the salt. Bring to a boil, reduce the heat, and simmer for 25 minutes, or until the chicken is cooked through. Set aside in the water.

Put the broccoli into a saucepan, add water to cover, and heat to boiling. Continue boiling for 6 to 8 minutes, until just tender. Drain and arrange the broccoli in a single layer in the baking dish.

Remove the chicken from the skillet and strain the broth. Lay the chicken over the broccoli. Return the strained broth to the pan and boil until reduced to 1 cup.

In a saucepan, melt the 3 tablespoons butter and stir in the flour. Whisk in the reduced broth and the milk and cook until the sauce is thickened. Whisk in the sherry, mayonnaise, lemon juice, and tarragon. Fold in the whipped cream and ½ cup of the Parmesan cheese.

Spread the sauce over the chicken and top with the remaining ½ cup Parmesan cheese. (The dish can be assembled ahead up to this point and refrigerated for up to 1 day. After adding the topping, bake for an additional 10 minutes.)

Toss the cornflakes in the melted butter and sprinkle over the casserole. Top with the almonds. Bake for 20 minutes or until heated through and the top of the casserole is lightly browned.